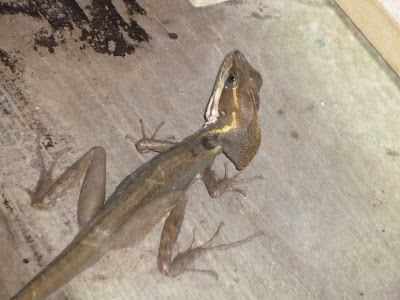 Along the river we saw many birds, as well as crocodiles and spider monkeys. 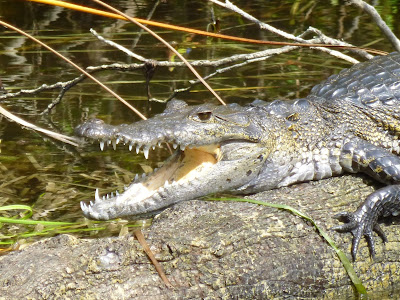 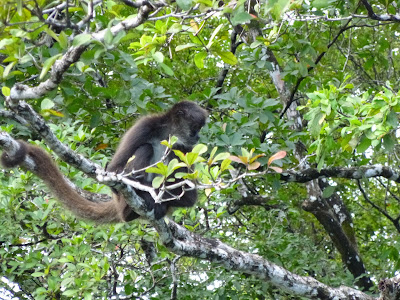 Garry wanted to learn more about the birds in the area, so our hosts set us up with a guide early one morning, and we went out in a boat onto the lagoon and saw many birds that I had never heard of, including the jacana.

After a few days at Crooked Tree, we returned our rental car and took a cab to the water taxi which would take us over to Caye Caulker. The boat was filled with people and their gear and everyone tried to get a spot away from the water spray. At least it was warm!

The water taxi dropped us at the dock on Caye Caulker, and a bicycle cab took us to  cabana #5 at Costa Maya Beach Cabanas which had a small kitchen area, bed, bath and balcony. Here's the view from our balcony. Our room came with use of bikes, kayaks, and a grill. We were very happy with our choice via the internet. 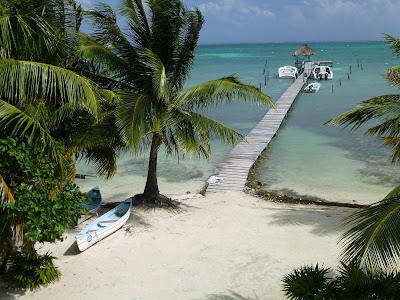 We rode bikes from one end of the island to the other - about 5 miles one way. The island is about 1 mile wide. No motorized vehicles are allowed on Caye Caulker, except for delivery trucks, etc. If you'd like more information, try this website: Go Caye Caulker. 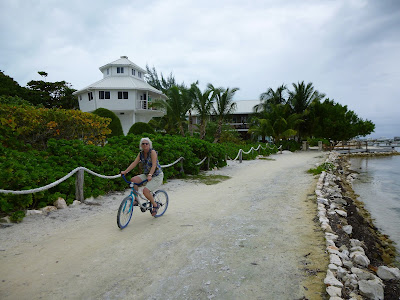 Garry likes to get up early with his camera and check out the sunrise with the birds.
Garry hired a fishing guide for part of a day. I went along for the ride. You need to be an experienced fisherman for "sight fishing"; casting your line as the guide spots fish. I enjoyed the boat ride in the sun.

We met people from all over the world who were living, working or visiting Belize. We didn't meet the owner of this boat but I'm sure he was an interesting character. 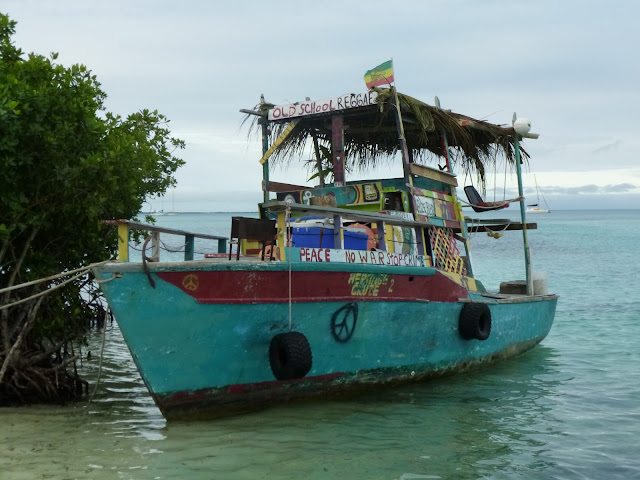 Garry mounted this Quebec Caribou for a customer. For those of you interested in the process of creating a large taxidermy mount, here are some photos of the procedure.

Here is the tanned caribou cape and antlers. 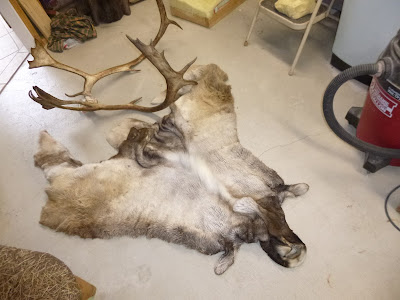 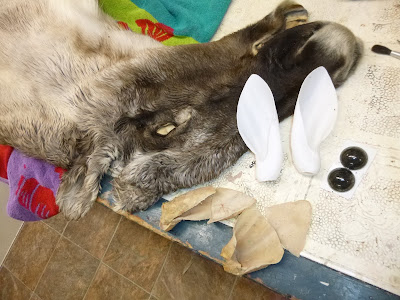 Before the project is started, after measuring the cape and antlers, Garry orders a molded foam manikin from a taxidermy supply company. Here is the caribou form with the antlers attached. 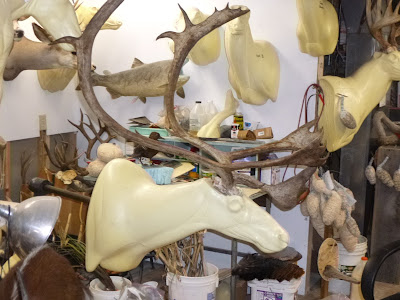 Next, the glass eyes are attached to the manikin using clay.
The eyelids and eyebrows are sculpted in the clay. 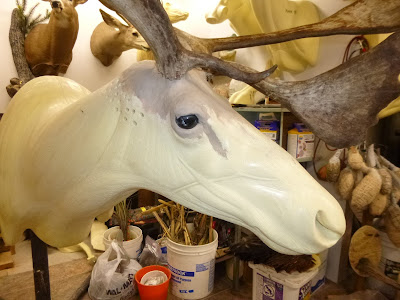 Next, the manikin is coated with a special glue (hide paste) for taxidermy. 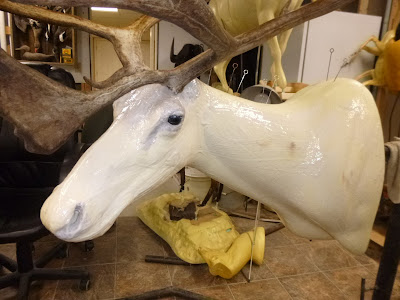 Here, the skin is ready to be set onto the manikin. 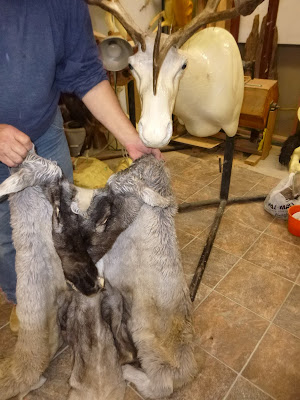 The lip skin needs to be tucked into the slots on the manikin. The mounting stand allows the manikin to be turned so that you can work on it from all sides. 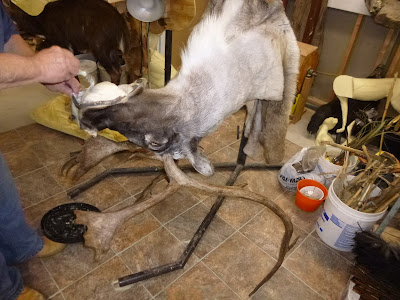 Sewing up the seams!  The mount will need to dry for about 2 weeks. 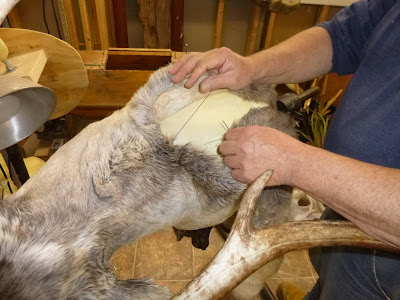 Finished Quebec Caribou, along with other projects in progress in the shop. The final touches involve epoxy work around the eyes, nose and lips, followed by painting the fleshy areas of the caribou. 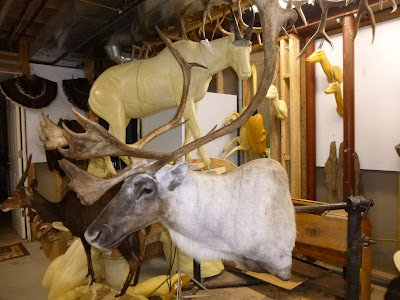 This is another finished Quebec Caribou. Note the difference in color of the fur.
Caribou vary a lot in color. 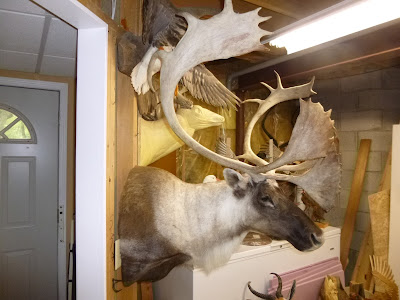 Here's Garry with two caribou with antlers in velvet that he collected on his last trip to Quebec from September 2001. I've named the one mounted on our wall Carlton, and over the holidays he was adorned with gold beads and ornaments.

Because an elephant ear is shaped like the continent of Africa, it makes the perfect background for a painting of the animals of Africa. Garry's customer in New York requested a painting of animals he had hunted, so Garry mounted this ear onto a plywood backing and the animals were beautifully painted by Wisconsin artist Scott Zoellick. Animals included are an Elephant from Zimbabwe, Cape Buffalo from Tanzania, White Rhinoceros from South Africa, Lion from Tanzania, Leopard from Zambia, Mountain Nyala from Ethiopia, Bongo from Cameroon and Lord Derby Eland from the Central African Republic. Garry's customer was thrilled with the result.

You can see more of Scott's Zoellick's work at www.thunderart.com.

In May, during turkey hunting season, Garry had been getting up at 4:30 a.m. to take some friends turkey hunting on some private land owned by his friend, and going out alone to  "play with the turkeys", (his words), calling them and taking photographs.

We always have a supply of wild turkey meat in the freezer.  Here is the recipe we like for turkey gumbo. Turkey Gumbo Recipe.  It's a good way to use up the tough turkey legs.

Boil the turkey carcass for three hours, or until meat falls off the bones. Cut up turkey meat and set aside. Reserve broth, add water to make 2 quarts, if necessary. Discard bones. Combine oil and flour in a large pot. Cook over medium heat, stirring constantly, until a medium brown roux is formed. Add onion, green pepper, and celery, cook about five minutes or until tender, stirring constantly.  Add sausage, turkey meat and broth. Simmer one hour.  Season to taste with salt and pepper. Stir in parsley and green onion, simmer 10 minutes. Thicken with gumbo file powder, if desired. Serve over rice.
Posted by Jeri Jackson at 3:37:00 PM No comments:

Garry currently has several clients who want zebra rugs. The process is interesting. About 3-6 months after the hunter returns from Africa, the salted, dried, disinfected skins are shipped from Africa by air freight to Chicago. A customs broker clears U.S. Fish & Wildlife, U.S. Dept. of Agriculture and U.S. Customs. The broker then forwards the shipment to a tannery in North Carolina. Four months later, the tanned skins arrive in the studio.

The next step is to rehydrate and stretch the skin onto a large piece of plywood, and nail it down around the edges. When it is dry (about 10 days), it is trimmed and taken to person who specializes in making animal rugs, who attaches a backing. 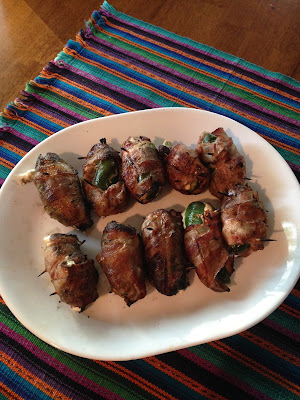 This is one of our favorite recipes, which can be served as an appetizer or main dish. Guests ask for it. It could also be made with other thin cuts of poultry.

Begin by cleaning the meat and checking for pellets if using wild game.

Place meat on a tray and sprinkle with Cajun seasoning or salt and pepper if you prefer a less spicy finished product.

Cut each pepper in half, scoop out the seeds and membranes, and dispose.
(You might want to wear plastic gloves while working with hot peppers). 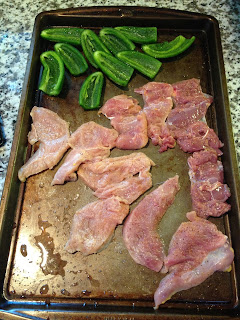 Fill each pepper half with cream cheese. 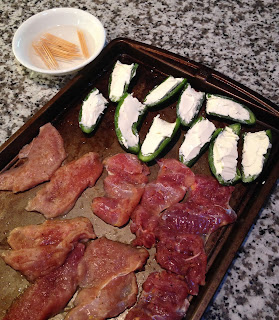 Wrap each pepper half with one slice of meat, followed by one slice of bacon.
Secure with a toothpick on each end. 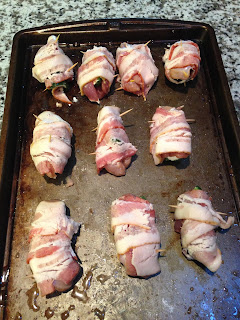 Grill over medium heat. We use the top shelf of our gas grill. Cooking time is approximately 20 minutes total, turning them mid-way through cooking. Watch for flare-ups from the bacon grease, and douse with a spray bottle of water if needed. 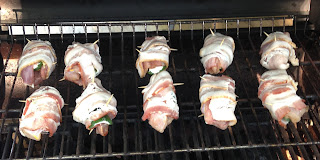 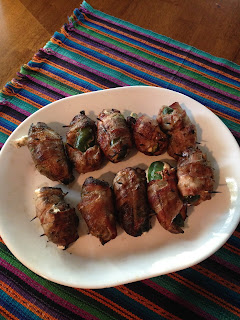 Plate up and enjoy!

The marinade recipe is from Ducks Unlimited Magazine, May/June 2016. 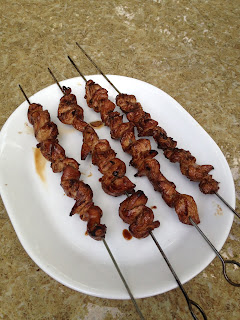 Combine marinade ingredients in large bowl or pan.
Marinate for 1 hour.
Thread strips of meat onto skewers. If using wooden skewers, soak them in water for about 30 minutes before using.
Grill on medium heat for about a total of 10 minutes, turning halfway.
For maximum tenderness, do not overcook the meat.