Paul Smith wrote this touching article about Garry's friend Dennis, who hunts with his son and grandson.

The Grateful Heart of a Hunter at Sunset
Published in the Milwaukee Journal/Sentinel,
November 12, 2016. 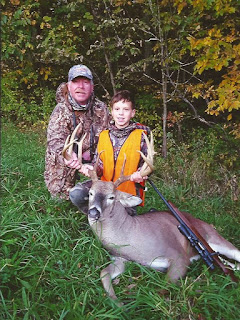 The start of the season was more than a week away, but on Thursday  Dennis Kowalewski of Helenville began to gather his gear for the 2016 Wisconsin gun deer hunt.
After more than 50 deer seasons, the ritual was familiar, the equipment and clothing like old friends.
“Not a lot of reason to change,” said Kowalewski, 68. “It works.”
The plan and his hunting partners were the same, too. On Friday before the opener, he’d meet up with his two sons, Luke of Waukesha and Matt of Milwaukee, and grandson Owen of Waukesha.
They’d pack into one vehicle and the four Kowalewskis would drive west to Richland County, the place they’d hunted for 25 years.
They know the property well and, though nothing is ever certain in hunting, experience had taught them to expect to see deer on opening morning.
All the pieces Dennis Kowalewski carefully assembled over the years for his family to enjoy their favorite outdoors pastime seemed to be in place. Except for one almighty important one.
“I don’t know what’s coming,” Kowalewski said. “I mean, I know what’s coming. But not when.”
Kowalewski retired in 2000 after 34 years on the Milwaukee Police Department, much of it on the SWAT team.
He and his wife Mary were enjoying their retirement, which for Dennis included lots of hunting. He had a lease on a 125-acre property near their home in Helenville that held deer.
He also made trips to western states, and the annual sojourn to Richland County with his boys.
Then one morning about two years ago he woke up and couldn’t move his left arm.
A barrage of tests eventually revealed the cause: a type of brain tumor called astrocytoma. Worse, it was malignant.
“The doctor didn’t pull any punches,” Kowalewski said. “There was basically no chance of a cure, just treatment to buy time.”
The grizzled ex-cop talked about his condition without self-pity. Like anyone, he wished he had more years to enjoy life after retirement.
But he routed the conversation toward memories of good times and things for which he was thankful.
Kowalewski grew up in Milwaukee with three brothers and graduated from Messmer High School. He fondly recalled playing basketball in an alley behind his house with John Johnson, who would later star in the NBA.
Once on the police force, Kowalewski used much of his vacation time for hunting. He traveled to western states about 40 times, and made four trips to Africa.
“I got to do most of the things I wanted to do,” Kowalewski said.
Last year, chemo and radiation treatments had beaten his body so badly his doctor wouldn’t let him go hunting during the gun deer season.
A month ago, though, Kowalewski was able to make the trip to Richland County with Luke, 41, and Owen, 11, for the youth deer hunt.
“We need to get kids outdoors,” Kowalewski said. “They’re playing too many computer games.”
The three sat in a ground blind together on Saturday of the youth hunt. Toward the end of legal shooting time, Kowalewski and his grandson talked about the possibility of shooting a doe.
At that moment, an antlerless deer came into the field.
“I asked Owen if he could see it,” Kowalewski said. “He said yes. But then he said a buck was coming, too.”
Owen settled his rifle scope on the antlered deer and squeezed the trigger. The buck bounded into the woods about 125 yards away.
Three generations of Kowalewskis walked out to search for the deer. What they discovered just inside the treeline was a buck of a lifetime. The deer is being mounted by taxidermist Garry Senk in Muskego; it is likely to score more than 150 inches.
“I couldn’t have been happier for Owen,” Kowalewski said. “That was something we’ll all remember…”
Treatments for Kowalewski’s brain tumor had kept it about the same size over the last year. But recently it started growing. He’s now getting stronger chemo.
The cancer has taken away the use of his left arm. And his energy is running low. On a trip last week to northern Wisconsin, he had trouble walking 250 yards to a ground blind.
“You know who I really feel for, is these guys coming back wounded from Afghanistan,” Kowalewski said. “They are too young for that.”
On Thursday, Kowalewski had his sights set on the Nov. 19 opener. The chance to hunt one more time with his sons and grandson is pulling him forward.
Deer hunting is more than a chance to put antlers on the wall or win bragging rights. It's a link to our ancestral hunting and gathering roots. It's a tie that binds modern families together.
"I don't know how much time I've got," Kowalewski said. "But I missed last season. I'm determined to get out there this year with my boys."
All of us will have a last hunt. Not many will realize it before hand.
And precious few will face it with such grace as Kowalewski.
"We might get a deer, but that doesn't really matter," Kowalewski said. "I want to get out and share another sunrise with my boys. For me, that's living."
Wisdom knocks with such clarity, doesn't it?
Where ever you find yourself this deer season, here's hoping you follow Dennis Kowalewski's example.
Keep your family and friends close, savor every moment.
Godspeed, Dennis, Godspeed.
Posted by Jeri Jackson at 12:50:00 PM No comments: