I've been slacking on the blogging lately, but here's a post written by the taxidermist himself, Garry, about our trip to Belize in January, 2017. 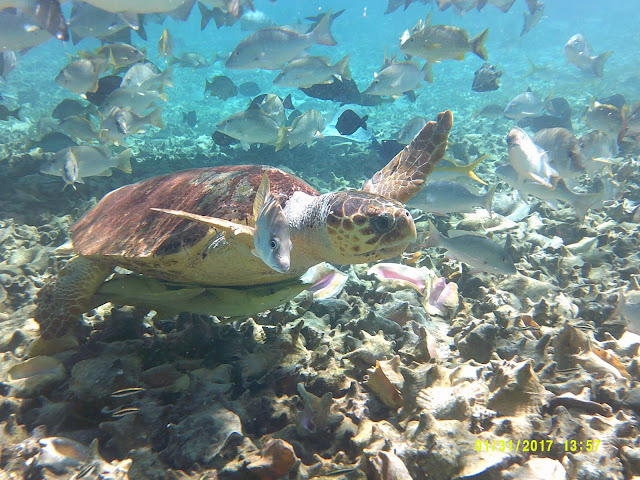 My wife, Jeri Jackson, and I went back to Belize in late January, 2017. On our first trip a few year's earlier, we traveled north to the Crooked Tree area. This year we drove south along the Hummingbird Highway and the Southern Coastal Highway to the Placencia Penninsula.


After an adventurous drive from Belize City to Maya Beach in the dark, we found our room at the beautiful Swan Villas in Maya Beach. There are only 4 units in the complex so far and the studio unit we had was plenty of space and had a great balcony. There are quite a few local restaurants nearby serving delicious seafood.


We also took a boat trip out of Placencia to snorkel at Laughing Bird Caye and also drove to the Cockscomb Basin Jaguar Reserve near Victoria Peak.

We didn't see a jaguar (it's very rare to see one), but we saw many tropical birds while hiking along a jungle river. We emerged covered in bites from tiny "no-seeums" (sand fleas). Jeri deleted the photo of her red, itchy legs, but can tell you about her search for something to relieve the pain, which resulted in our finding a the local remedy made from hemp seed oil. 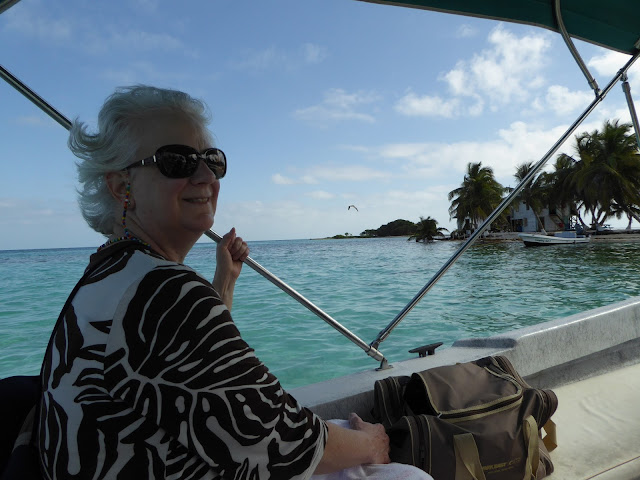 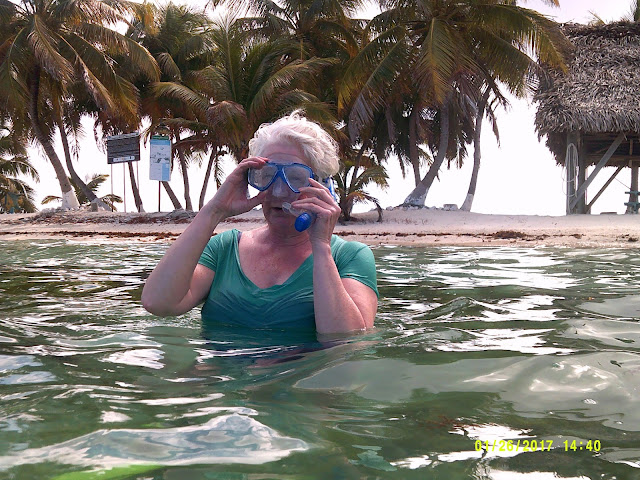 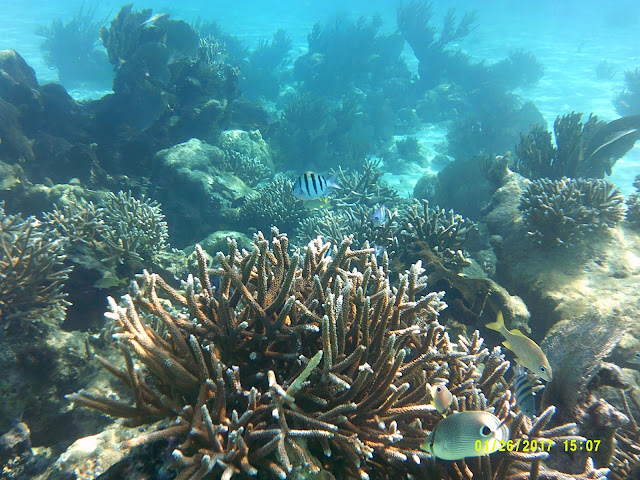 After a few days in the south, we drove back to Belize City and took a water taxi out to Caye Caulker. We had such a great time on the small island on our first trip that we had to go back. Caye Caulker is much smaller and has fewer tourists than the more popular Ambergis Caye. There are no cars allowed, just bikes and golf carts. If you're thinking about traveling there, this a good Caye Caulker web site.

Sitting on our patio at the Barefoot Beach resort looking out at the Barrier Reef and watching the sea birds was so relaxing. 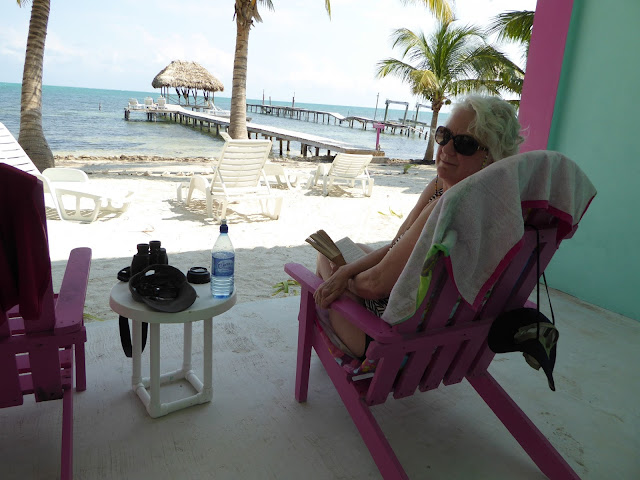 The snorkeling at Hol Chan Reserve is unbelievable; swimming with the sea turtles, fish, sharks and rays. We made six different stops on the reef and I took over 300 photos with my new $39 digital camera that is waterproof to 10 feet deep! What a great buy! 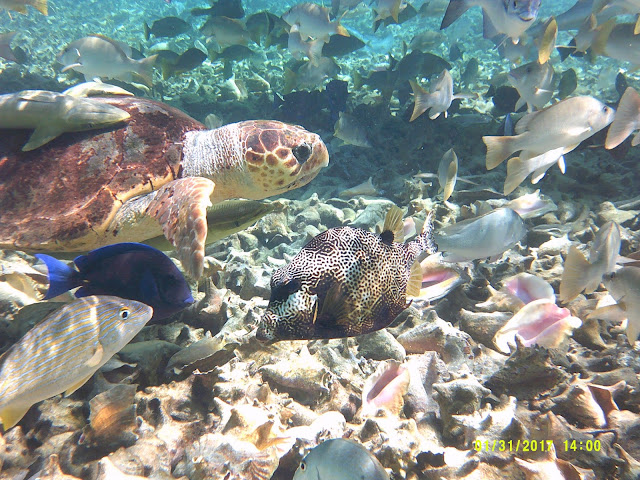 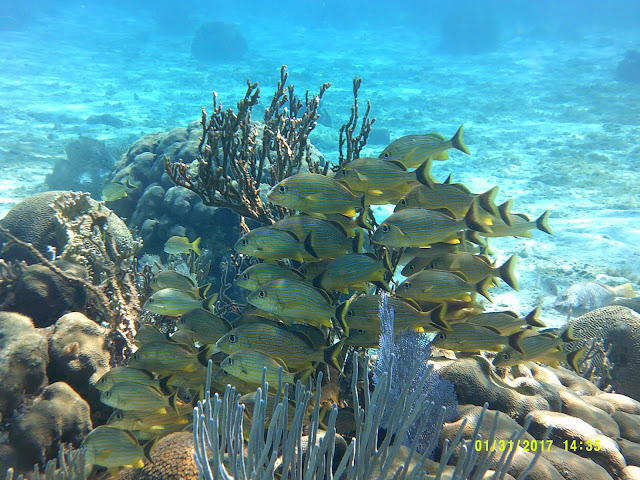 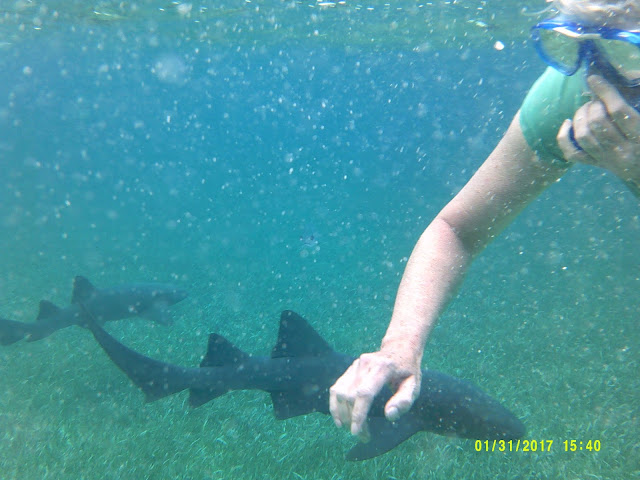 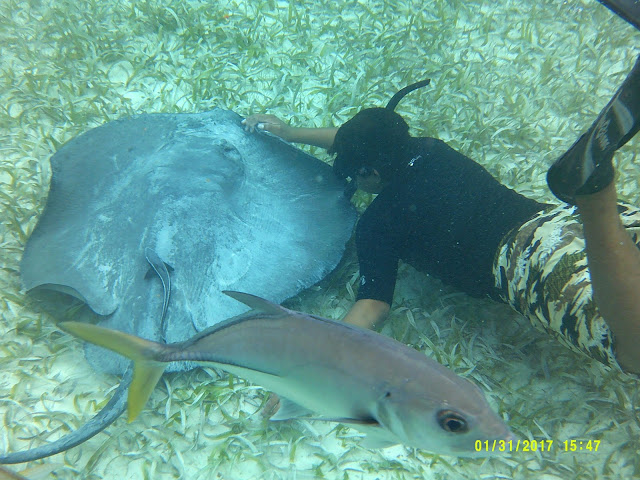 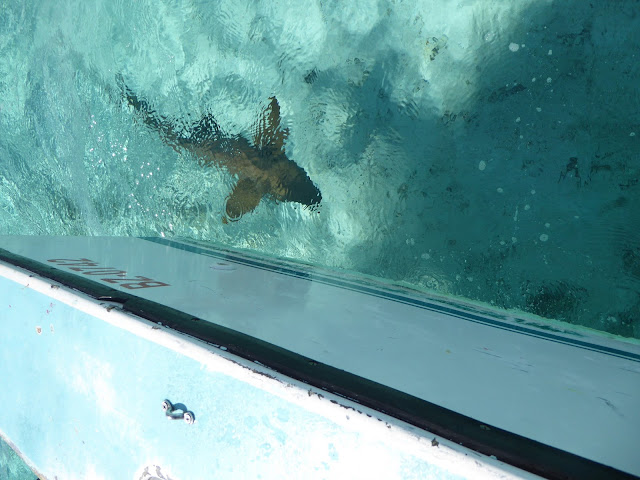 We also went fishing another day, catching a lot of different reef fish and keeping enough snappers for a meal.

Even though the island has become busier in the past few years, with construction of new hotels, bars, and restaurants and there are more tourists, it is still a peaceful and friendly place. Winter weather is sunny with temps in the low 80's. We like Belize because it is easy to get to with reasonable airfare & accommodations, is English-speaking and the 2:1 dollar exchange is simple. It was another great trip, and we're already talking about trying to go again to explore more of the country.
Posted by Jeri Jackson at 1:38:00 PM No comments: