We took a day trip to Aransas National Wildlife Refuge near Austwell, Texas. We left our condo on North Padre Island, crossed the Packery Channel to Mustang Island. We took the scenic route driving about 8 miles on the beach to Port Aransas. 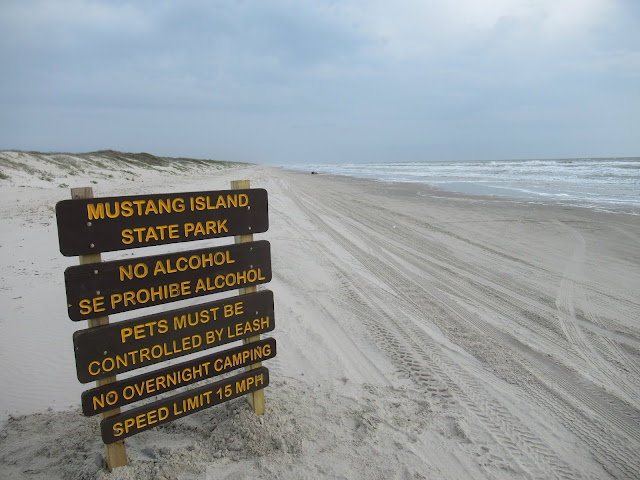 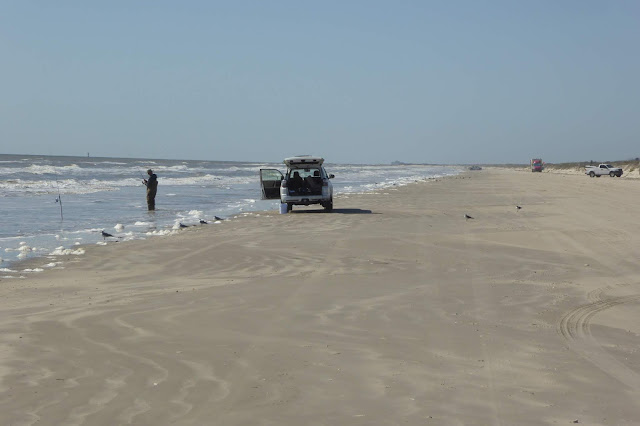 We saw a lot of people surf fishing on Mustang Island. Most were catching whiting and hardhead catfish. There are a lot of beach homes and condos near Port Aransas and it's a popular vacation spot, especially during spring break and summer. 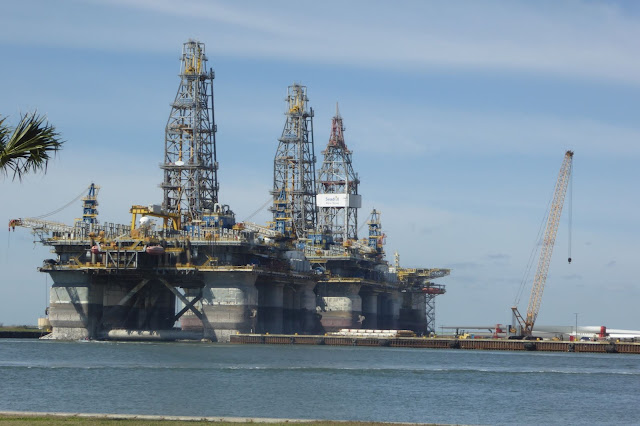 Floating oil rigs parked near the ferry which goes from Port Aransas to Aransas Pass. 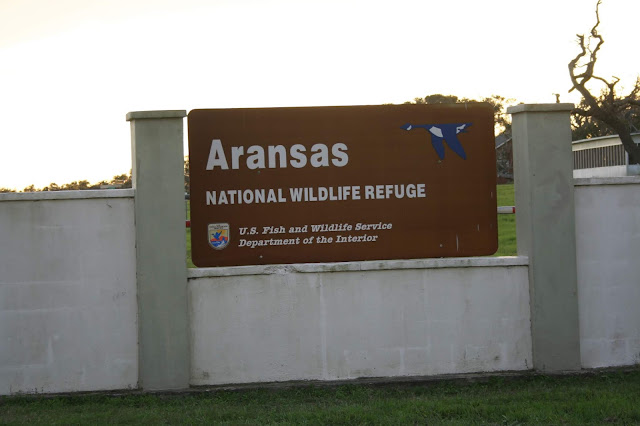 We drove through Rockport, across Capano Bay, heading to Austwell, Texas and the refuge (about 25 miles from Rockport).The original refuge headquarters is closed due to damage from Hurricane Harvey in August, 2017. Their current headquarters is in a mobile home.  The refuge manager told us that the cement building had major roof and mold damage that it will need to be demolished and completely rebuilt at a later date. Garry had hunted in the area and had been to the refuge 15 years ago and at that time saw many displays in the headquarters, which were destroyed with the hurricane. 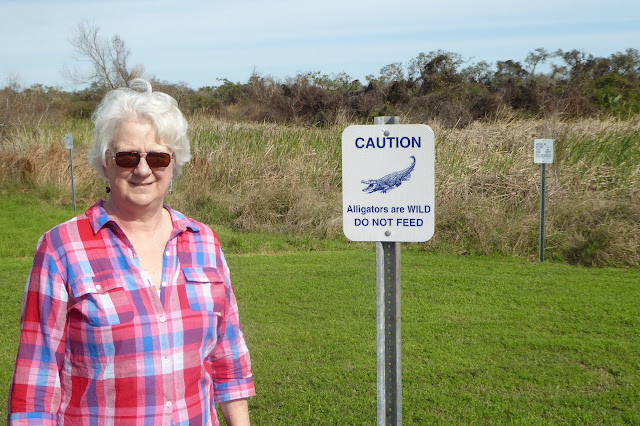 I followed directions for a change and didn't try to feed any animals. 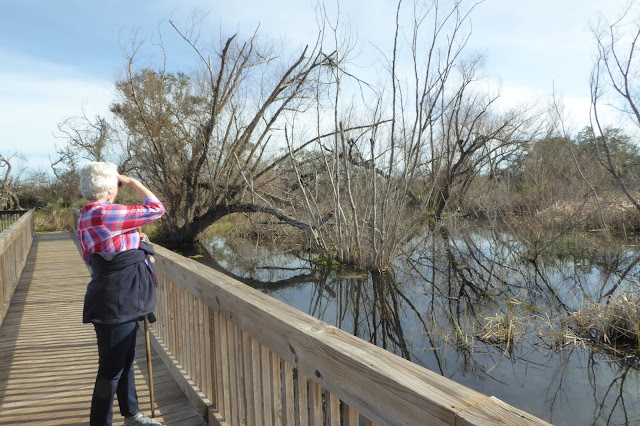 There are nice boardwalks across the wetland areas. 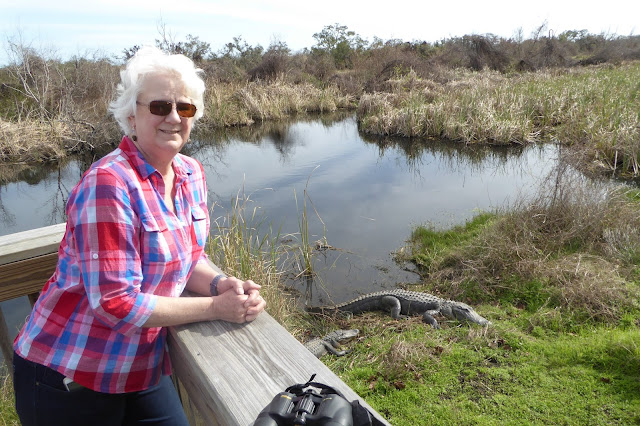 Some of the wetland areas have observation platforms. I stayed on the platform! 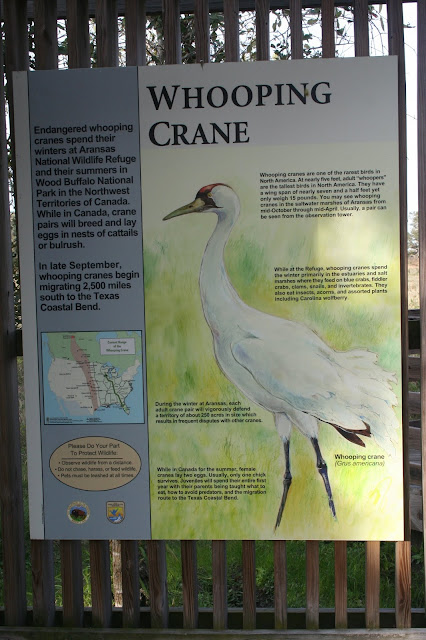 The majority of the wild whooping crane population comes from Wood Bison Park in Canada to spend the winter at the Aransas Refuge. We saw on the local news that the  Twenty-Third Annual Whooping Crane Festival  was taking place in Port Aransas during our stay, so we stopped in at the Community Center for the birder's show, which was very interesting. 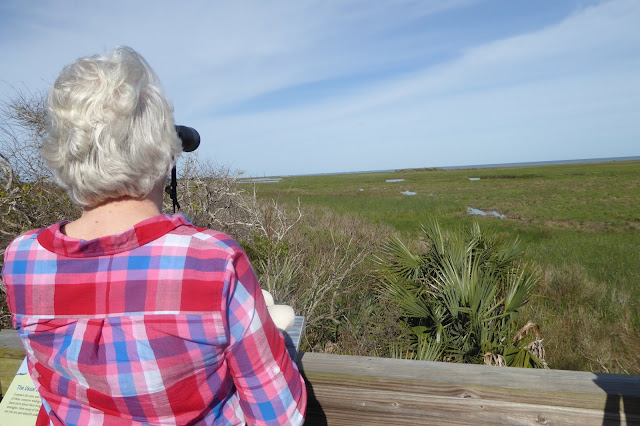 We spotted a pair of whooping cranes in the distance while on an observation platform.

In the past Garry had walked on boardwalks through the wetland area near Mustang Lake, and observed many water birds and other wildlife. We could see the damaged boardwalks which are not yet repaired. 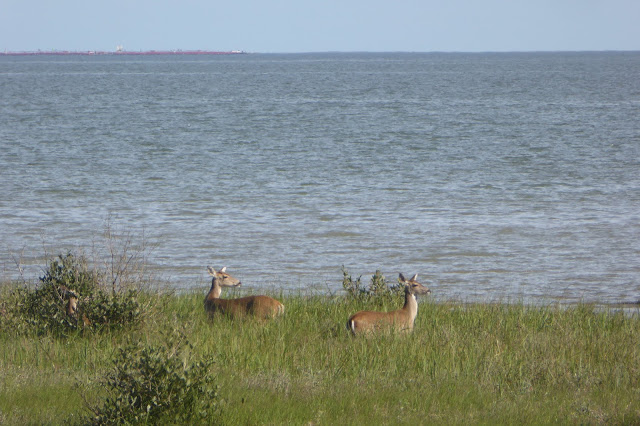 We saw many whitetail deer on the refuge. Garry saw many javalina on previous trips, and I really wanted to see one, but we didn't see any this time.


We saw many ospreys in the area, but only one bald eagle. 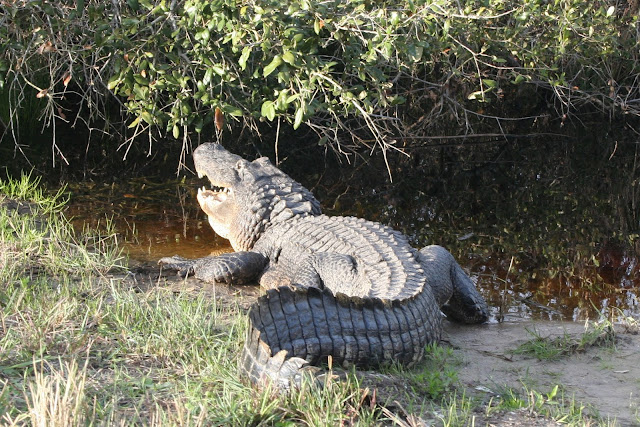 We saw this 9 ft gator near Jones Lake. We took the photos from the car! 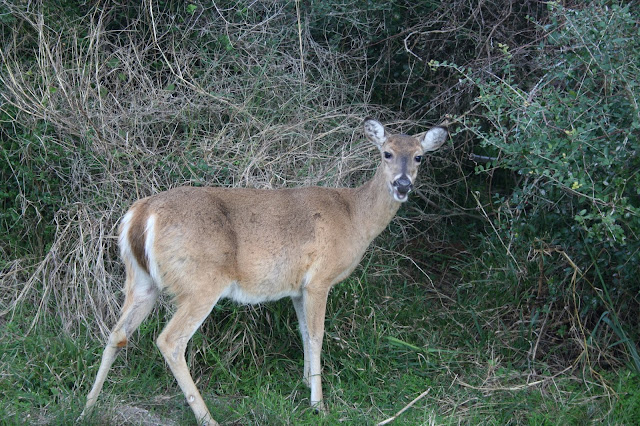 We drove the auto-tour loop through the refuge and this deer posed for us. 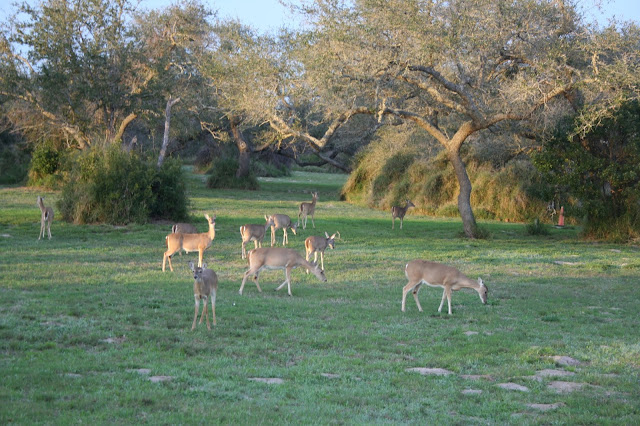 Many deer came out to feed close to sunset. 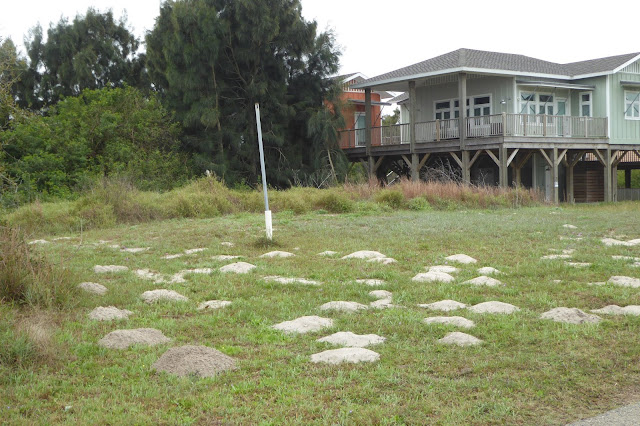 Many yards in the area have damage from the burrows of pocket gophers. 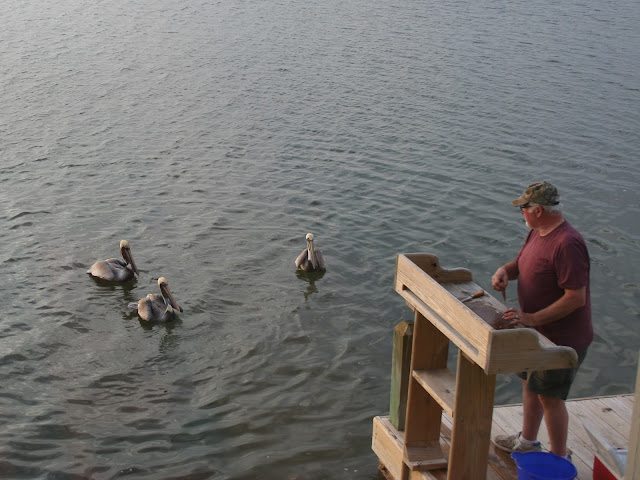 Back at the condo, Garry had company while cleaning some Whiting he caught. Pelicans, Egrets and Herons are always ready for fish handouts. 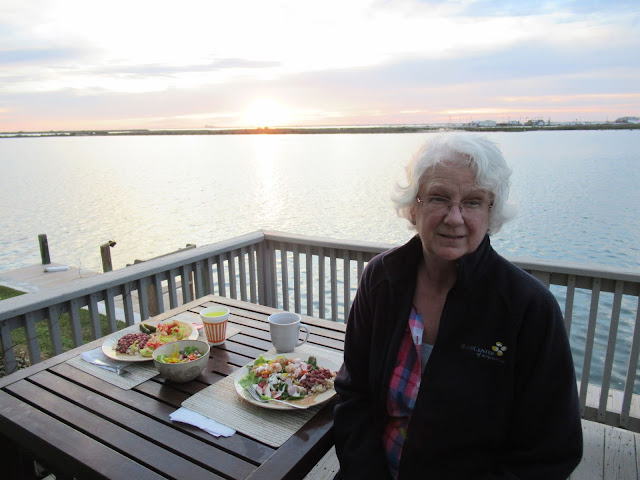 I made some fish tacos with the Whiting for a tasty dinner on the deck. 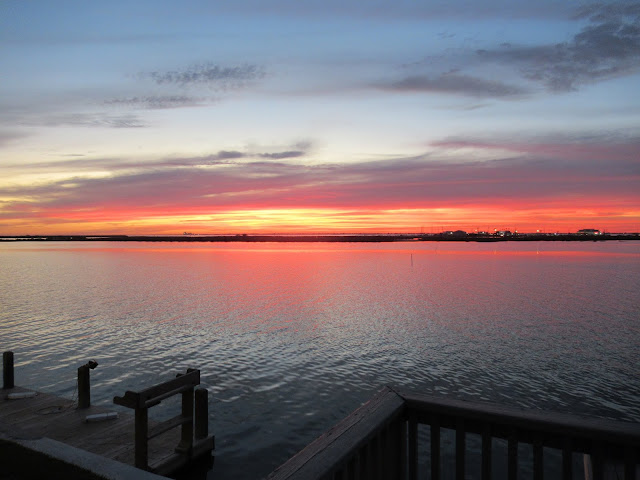 Another beautiful sunset from the deck!

Every night Black-crowned Night Herons came to feed on our dock. It was entertaining to watch them catch many fish!

Because we really our enjoyed our month away from Wisconsin winter last year in Alabama, we planned another winter getaway, this time to the Corpus Christi, Texas area. We had found a nice condo in 2017 and planned to visit Corpus Christi in February 2018, but Hurricane Harvey in August, 2017 changed our plans, when the condo had minor damage and the owners had to cancel. At that time we found a place in Gulf Shores, Alabama on short notice and went there last February. This year, the condo was available so we were able to make the trip to Texas.

The next day it was 84 degrees when we stopped in the afternoon to visit our friends Dave & Laurie in Breaux Bridge, Louisiana.  Dave had some homemade Cajun venison sausage and Blackbuck Antelope backstrap meat to give us to use while we stayed in Texas. I made several batches of excellent gumbo (according to Garry) with the sausage during our stay, adding in some fresh shrimp and oysters that we bought at local Corpus Christi markets.

Crossing the border into Texas, we stopped in Beaumont and had a great seafood dinner at Pappadeaux Seafood Kitchen, which had been recommended by Dave. We spent the night in Winnie, Texas. The next day we passed through High Island, where Garry has duck hunted many times. Heading west we drove down the Bolivar Peninsula, and crossed the channel to Galveston at Port Bolivar on a 20 minute ferry ride. We seem to always have at least one ferry ride on our vacations! I guess that's because we like to vacation near water.


We stopped in Galveston at their Visitor Center and did a bit of exploring the historic district, the Marine Museum, and Seawall Drive.

The shipping channel for ships heading into Houston was very busy, and we saw ships arriving and departing from all over the world.


Traveling down the coast, we went through Freeport and saw many oil refineries.
We traveled the coast to Corpus Christi, passing through Bay City, Port Lavaca, and Rockport. We had to take a very short ferry ride at Port Aransas across the shipping channel to Corpus Christi because there is no bridge. The ferry operates 24 hours a day.  Port Aransas is on Mustang Island, and was the bullseye of Hurricane Harvey in August, 2017, and there is still a lot of damage visible. We drove another 20 miles and arrived at our rented condo.


The condo was a lower unit with 2 bedrooms & 2 baths with a nice kitchen and a great view of Laguna Madre. Many units were rented to other snowbirds, as evidenced by all of the license plates from Minnesota, Wisconsin, Illinois, Ohio, etc. It had a pool, but the weather was not warm enough for swimming. The condos are on the Laguna Madre side of the Island, with the Gulf of Mexico side of the Island a mile away. We had a view of the JFK Causeway bridge, which connects the island to Corpus Christi mainland, 2 and a half miles away. 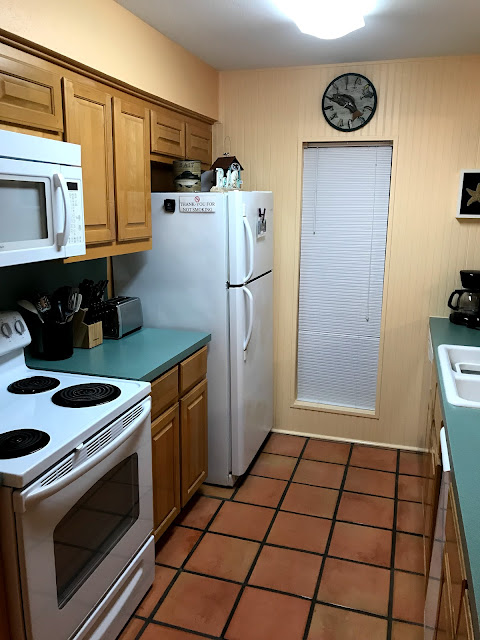 As we drove away from the condo one morning, I spotted some birds on a neighbor's roof a block from the condo. I asked Garry what those birds were that "looked like baby turkeys". He got very excited and he told me they were Black-bellied Tree Ducks. He went back to watch them the next morning and spoke with the homeowner who is feeding them and attracting them to his yard. They are Mexican species which is becoming more common in Texas and Louisiana. The ducks were there every day during the month and flew past our windows daily.


The Bob Hall Pier is a fishing pier located in the Padre Balli State Park, which was near our condo. We tried the Mikel Mays Restaurant and the food was OK, but we were disappointed to learn that their fish dinner was actually Swai (which is a farmed fish from Vietnam which we normally would not eat). We assumed we'd be getting locally caught fish. From then on, we always asked about the origin when eating out or purchasing seafood at the markets.

The shore fishing was not very productive because it's early in the season and Garry was told by the locals that the "shrimp were spawning and in the mud". However, he did catch a huge Black Drum, which the locals call a "Big Ugly". He estimated that it weighed between 25 and 30 pounds, and he couldn't get it out of the water. But I got a picture and then he broke the line to let it go.
There were many places for us to explore, including Padre Island National Seashore. We used our Senior Lifetime Pass for free entrance. One advantage of aging! Garry enjoyed visiting almost daily in early mornings so he could watch the many birds, including 15 species of waterfowl and many Mexican species of birds (see the upcoming separate post about birds).

We learned that Texas beaches are all roads and the sand is safe to drive on because it is hard packed. There are areas where you can drive for as far 60 miles, but you do need a 4WD vehicle and you need to take emergency supplies like water. There is no cell service. You also must notify the park if you plan to drive down that far (towards Brownsville). The Mansfield Channel separates North Padre and South Padre Island.


We had a few sunny days with temps in the 80's, but there were many cloudy days, a lot of morning and evening "Sea Fog" and a lot of wind on the island, especially on the Gulf side, when Garry was fishing and I was beach-walking.